What To Do When Your Kid Cuts Their Own Hair

Share on facebook
Share on google
Share on twitter
Share on linkedin
But at five years old, my sister wasn't the best hairstylist and she completely butchered her attempt at great bangs (cutting them all the way to the top). The picture to left showcases her "new bangs" just weeks after the big cut. 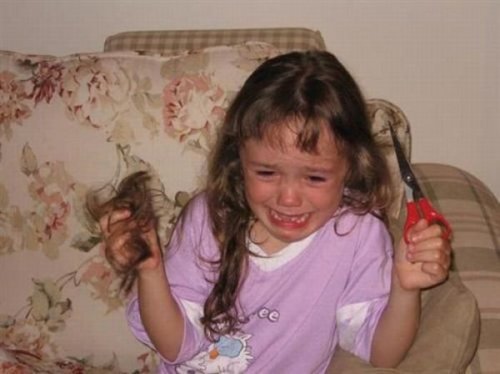 If so, you aren’t alone. In fact, if you have a few minutes and want a few laughs – check out this compilation video featuring kids who cut their own hair.

I can safely say I never put a pair of plastic scissors to my hair as a kid, but my sister certainly did! She must have admired her older sisters’ bangs so much that she decided to take the bang plunge herself.

But at five years old, my sister wasn’t the best hairstylist and she completely butchered her attempt at great bangs (cutting them all the way to the top). The picture to left showcases her “new bangs” just weeks after the big cut.

I asked my friends on Facebook if they had any other similar stories about cutting their own hair. And to my surprise, nearly 20 friends responded with hair cutting stories from their childhood. One friend cut off an entire ponytail because she was bored. Another friend bribed her sister to chop off her hair! Many of my friends shared that cut their own bangs just like my sister did.

So when kids cut their hair – no matter the age – here are four tips to consider:

1. Call your hairstylist ASAP. Unless you are a hairstylist, DO NOT try to fix this hair mishap at home. You could end up making the situation (and haircut) much worse. Schedule a hair appointment with your hairstylist and let her / him work their magic!

2. Accessorize! Encourage your kiddo to wear a hat, put on a headband, or try out a creative hairstyle to cover up the damage. If the haircut isn’t THAT terrible, remember there are some pretty awesome asymmetrical haircuts out there!

3. Teach them a lesson, but don’t embarrass them. Often – children cut their own hair because their monitor skills are advancing and so is their sense of independence. They could also be inspired by hairstylists that you know (or they see on TV).

Another article said, “When we frown and say, ‘Don’t ever do that again!’ we’re telling the child, ‘The core parts of you are bad,’ even if we’re only saying the behavior is bad. They’ve got the capacity to really be independent for the first time; we don’t want to kill that…”

So how do you teach them a non-embarrassing lesson?  You could just let them deal with the “natural consequences” (i.e. not fixing it and making your child explain to other people what happened to their hair). This will help them take accountability for their actions. But alas, I am no parenting expert and this isn’t a parenting blog, so I’ll leave that one up to you!

4. Teach your kid other creative ways to use scissors. Let’s be honest- banning scissors in your house is not a long-term solution. You’ll need the scissors one day soon enough and craft time is always fun (especially in this Pinterest-inspired world we live in).

Make plans to have a craft play date so your child can see other other kids use scissors (the proper way). Make crafts, cut shapes, teach them how to wrap presents, etc. On the other hand, if your child said they cut their own hair because they want to be a hairdresser when they grow up, you might take a different approach. Depending on their age and scissor skills, you could buy a doll or mannequin. Encourage them to only cut the doll’s hair for practice. They will be proud to show off their new talent and creativity – and hopefully keep the scissors away from their own hair!

But no matter what- there is one thing you can’t forget! Do NOT forget to take pictures. Even though you’ll probably be upset in the moment – I promise you will laugh about this memory for years to come.

In the meantime, don’t forget to share your kid hair cutting stories with us on Facebook. Pictures are also welcomed and encouraged.